We people are funny creatures.  We like to order our world, from A to Z, from soup to nuts, from small to large and back again.   Everything has a name, a meaning, and a theme.  Our towns are perfect examples.  For more on this, see last month’s Part 1 post here.  We line things up according to grids and patterns, and then, once everything is right where it needs to be and running smoothly, we decide we need something different, a change—we call it modernizing—and we scrap the old standard for something “new.”

We begin at the beginning, Main Street, and move outward as the geography allows, and number and letter the streets for easy access.  Over time, street names take on special meaning.  Some names are rooted in the historical and geographical landscape around us, such as U.S. Presidents, States, and Capitols or trees, flowers, and the Great Lakes.  They are part of our culture’s knowledge base; we can’t miss the origin and meaning behind them.  Then there are names that are special to smaller groups within the community.  A land developer buys the field next to you and decides to build homes.  He also builds a curvy road with several side streets, each one needing its own name.  He might propose a theme for the names but also include some names from his own family.  If the names meet local requirements, they become a bit of local history. 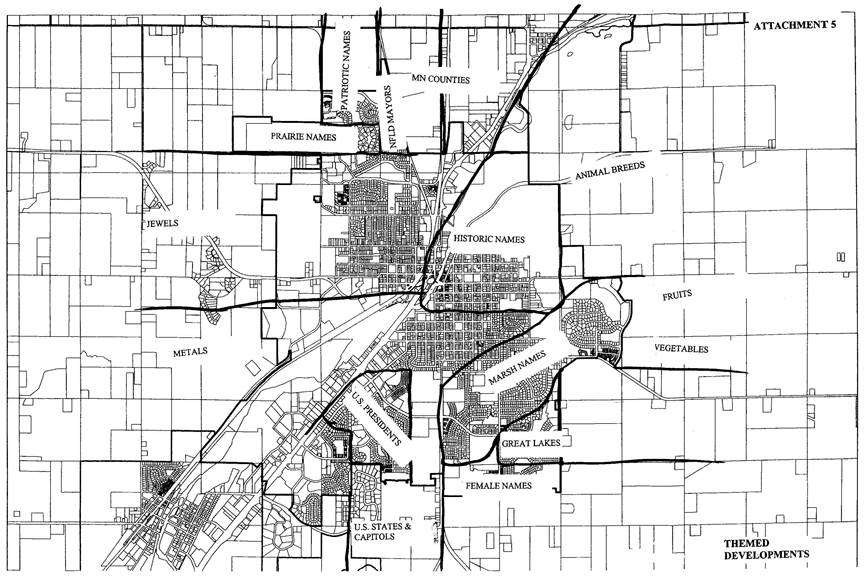 Local history is a lot like the locals who become a part of their community’s story.  The people most familiar to the characters and events live and die or move into another neighborhood and the local stories begin to fade.  Local history becomes the property of the historical society and, if you are lucky, they keep the stories alive through podcasts and exhibits for all to use, and display neat artifacts and primary sources like journals, letters and photographs; much like Northfield’s Historical Society.  (Special thanks to Stephanie Hess, Curator of Special Collections and Digitization for her help in unearthing background information for this post and also to Scott Tempel, Northfield’s City Planner, for providing helpful maps and information on local street naming.)  Better yet, look for living relatives of those early history makers.  A good place to start is your own family, neighbors, church, and local clubs.

Do you know the stories behind the street names of Northfield?  Did you know that sections of Northfield follow themes for their street names?  Like most towns and cities, the downtown district follows a pattern of numbers and directions (1st St E, 2nd St E); landmarks (Bridge Square, Water St, and Division St); trees (Maple St and Elm St), and nationally known names (Washington St, Union St).  Names telling the story of the history of the town wind throughout—Ames St, North Ave, Archibald Cir, and Heywood Pkwy.  Smaller sections, such as the streets in Jefferson Park, are primarily Presidential and Constitutional (both Drives), as well as Presidents Adams, Johnson and Fillmore (all Streets).  Pockets of streets as in Hills of Spring Creek bear the names of bodies of water such as the Great Lakes (Erie and Ontario) and elsewhere, terms related to mills (Grindstone Lane and Waterwheel Drive).

Who were these men of Northfield?  Edward Thye was born on a farm in South Dakota to an immigrant family from Norway in 1896.  They moved to a farm near Northfield where he was raised and schooled.  His love for farming led him to Minneapolis where he studied at the Tractor and Internal Combustion School and the American Business College.  He served in WWI in the Air Corps but, afterward, returned home to marriage and the farm.  His experience in agriculture led him into politics as a deputy commissioner of agriculture and he eventually served as Governor and U.S. Senator.  Oscar Olson, a former farmhand, remembered Thye as an honest, hard-working politician.  He thought the farm helped him stay grounded and closer to his constituents.  Northfield was Thye’s home. He is buried in Oaklawn Cemetery.

Al Quie was also born on a farm, the family dairy farm near Dennison.  He attended school nearby in Nerstrand, high school in Northfield, and, after serving in the Navy as a pilot in WWII, he was graduated from St. Olaf College with a degree in political science.  He took a wife, raised a family, and followed his interest in politics, serving locally, then, in the Minnesota Senate, the U.S. House of Representatives, and in 1978, as Governor of Minnesota.  Throughout his career and life, he strove to maintain radical integrity, aggressively collaborate, and offer no excuses.  Many think he has more than accomplished this in public service, in non-profit ministries, and in family commitments.  For more on Al Quie, his life and local history go here and here.

The third governor in this area is Karl F. Rolvaag, born and raised in Northfield to a Norwegian immigrant family.  He grew up Norwegian, attended school in Northfield, and learned about the good and bad of life as he drifted around the country working many jobs, logging, cattle ranching, mining, farming and forestry.  He found his way back to Northfield where he earned a degree in American history from St. Olaf College just before he was drafted to serve in WWII.  He served bravely rising to Army captain, earning honors including the Silver Star and Purple Heart.  After the war, he found his way into politics serving as Lieutenant Governor, Governor, and Ambassador to Iceland among other jobs before retiring to receive treatment for his alcoholism.  For a closer look at the man, the soldier, and the politician, read this in-depth interview with Karl Rolvaag by historian Mark Haidet here.

What do Governors, mayors, mills, and flowers have in common?  Take a drive around Northfield and see for yourself.  And enjoy the view.