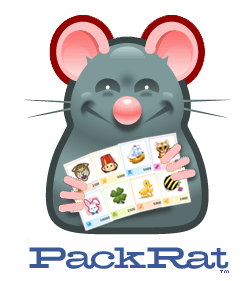 Real estate is a fundamental urge in our culture and in every culture. The basic need for shelter is everywhere and affects everyone. In this article we take a look at how real estate is depicted in a popular Facebook app game called Packrat.

Packrat is a game of virtual collectibles, a hoarding and trading game with purchases and feats that can lure you to addiction on Facebook. Every few weeks a new set of 15 or so cards is released into the markets and packs of the "rats" and game players, and while multiple sets of cards are available at any given time, a set can "expire" so there's a limited time in which to easily obtain all the cards in the set. Intermittent game play dedication is all that's needed to get by with some level of satisfaction, though buying and collecting with free game money is kind of fun any time of day or night.

An important aspect to Hermann's new home search is taking stock of his life savings (sand dollars). The real estate market is made up of several sand dollars worth. While out house surfing, they come across a rusty can and some old fishing net, which seems to be more of a fixer upper than Hermann can stand, so they keep looking. They come across some seaweed and colored glass, but this is too modern. What Hermann eventually settles on is a combination of a touch of modern, a touch of fixer and a lost button.One of the sets currently in play is "Hermann's New House", a parallel to a real estate home search story. Hermann is a crab who apparently has a shell that he is outgrowing. Crabs do this from time to time as shells aren't exactly made for adding on a sun porch or extra bedroom, so they have to find a larger abode to suit their changing lifestyle. As Hermann takes stock of his prospects, he realizes that there will be competition from other sea creatures, like gulls, so he enlists the help of a seal real estate agent. Combining Hermann, the seal and the gull makes for an interesting house surfing experience.