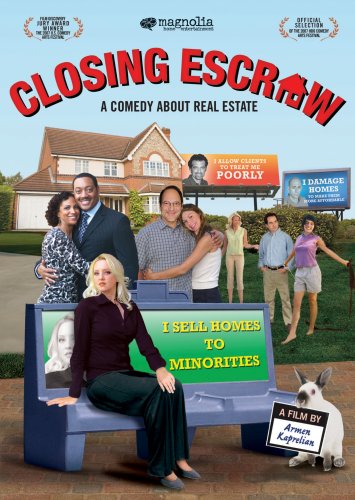 "Home isn't just a place you make food; it's a state of mind."

The story of 3 homebuyers takes us on a wild journey inside the motivations of buyer and agent alike, covering the strong attachments sellers have for their properties as well as equally strong aversions which are their reasons to move.

Out of all the factors involved in a real estate transaction, motivation is the most human and as this movie shows, the most humorous. It's the crazy things we do to our properties that makes them our own and it's a huge reason to own a property (because a lease agreement may prohibit them). For example: memorializing pets after they've passed. As hard as it is to say goodbye to your pet after years of loyal friendship, it's orders of magnitude harder to say goodbye a 2nd time. In one scene, one of the homebuyers talks about how they buried their pets in the backyard (a lovely fence surrounds several plots marked by crosses and one Star of David) and they painfully state that the home will soon be a place for someone else to bury their pets. The emotions of moving bring up everything you've ever done in that house, everything you're leaving behind (even though you thought you had moved on, all that stuff is trudged up again). Somehow, we find the strength to move on.

Opening your house for buyers to walk through feels like opening up your life to them, in the sense that you must hide as much of your life as possible (de-clutter, de-personalize) so the buyer can imagine their own clutter and personalization (so they'll feel warmth after you've made the house feel cold). In this movie, one seller (who is always home during showings) is constantly improving their property with electrical upgrades, new fencing, gazebo, roof work, dance floor, etc (mostly out of neighbor envy) to such an extent that they eventually think twice about moving at all.

This movie covers a lot of the activity of real estate buyers in a very funny way. Some is accurate, some definitely not, but not a bad film. Try it on your Netflix sometime.