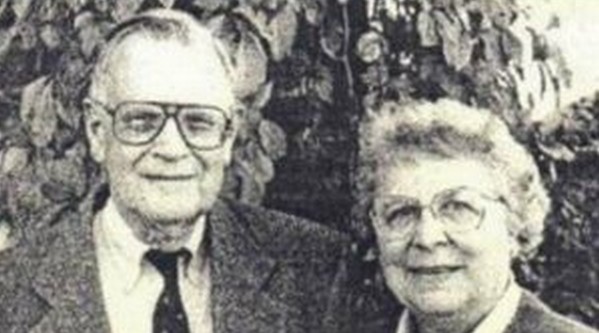 Have you ever panted past the Headley House during a run on the Carleton College campus and wondered who lived there? Maybe you happened upon the Marston Headley Research Room while investigating the Northfield Historical Society and wondered why a library research room would be named for anyone? When was the last time you were at a fundraiser for a community NGO and heard someone mention the Marston Headley and Dorothy Stone Headley Fund, part of the Northfield Shares foundation? Then there’s the Rotary; their primary purpose in the community is to serve. Did you know they have a service award dedicated to Marston Headley? Who is this Marston Headley and what is his connection to Northfield? I am so glad you asked.

Marston Headley believed in legacies starting with time and service. He was born into the family of a long-time Carleton College professor, Leal Headley in 1917. They lived at 815 East Second Street which was built to resemble the childhood home of his mother, Harriet Marston Headley. Marston studied at Carleton College and Harvard, served four years in World War II, and taught political science at colleges in Pennsylvania and Ohio before marrying and finding his way back to Northfield in 1965. His father had passed away and he and his wife intended their return to Northfield to be a short one, just long enough to help settle his father’s estate. His mother chose to return to her roots in California, while Marston decided the same and stayed in Northfield.

He and his wife both liked the neighborliness they experienced in Northfield, not quite like any other place where they had lived, and once settled, found ample places where they could volunteer. Marston became assistant librarian and was tasked with organizing the many historical documents given to the library. In 1975 he found himself a part of a committee to celebrate America’s bicentennial which led to establishing the Northfield Historical Society and serving on the Northfield Heritage Preservation Commission. Marston joined Northfield’s Rotary Club where he found many service projects available. He and his wife were happy to become a part of Meals on Wheels and the Community Action Center, among other projects funded by Northfield Shares foundation. Dorothy worked at all levels with Church Women United and Marston joined the Northfield Arts Guild and supported teen pregnancy prevention and projects that helped find mentors for youth.

In 1988, to commemorate Carleton College’s class of 1983, the Headleys and Harriet Marston Headley gave the family home on 815 East Second Street to the college. Since then, it has been known as the Headley House and has served as the official residence for the dean of the college, a residence for visiting scholars, a meeting place for college department special events, and now college rental housing.

Marston Headley enjoyed helping people. He shared his time, his energy, his knowledge, and his experience.  Giving of himself, face to face, impacted people personally. To encourage others to continue their legacy of volunteerism, Marston and Dorothy Stone Headley gave the first undesignated endowment to Northfield Shares. That gave the foundation the responsibility and freedom to award grants to organizations and programs in Northfield that would reflect their desire to help improve the lives of all people in their town. Northfield Shares describes the impact their generous financial endowment has had on the community: “The funds given by the Headley family have touched nearly every aspect of the quality of life we enjoy here in Northfield – programs that help and enrich the lives of youth, seniors, people with disabilities or low incomes…”  That includes education, access to healthcare, sports, art, small business, community maintenance and enhancement.

So, who is Marston Headley?  He is a true friend of Northfield.