Can you direct me to the nearest filling station? 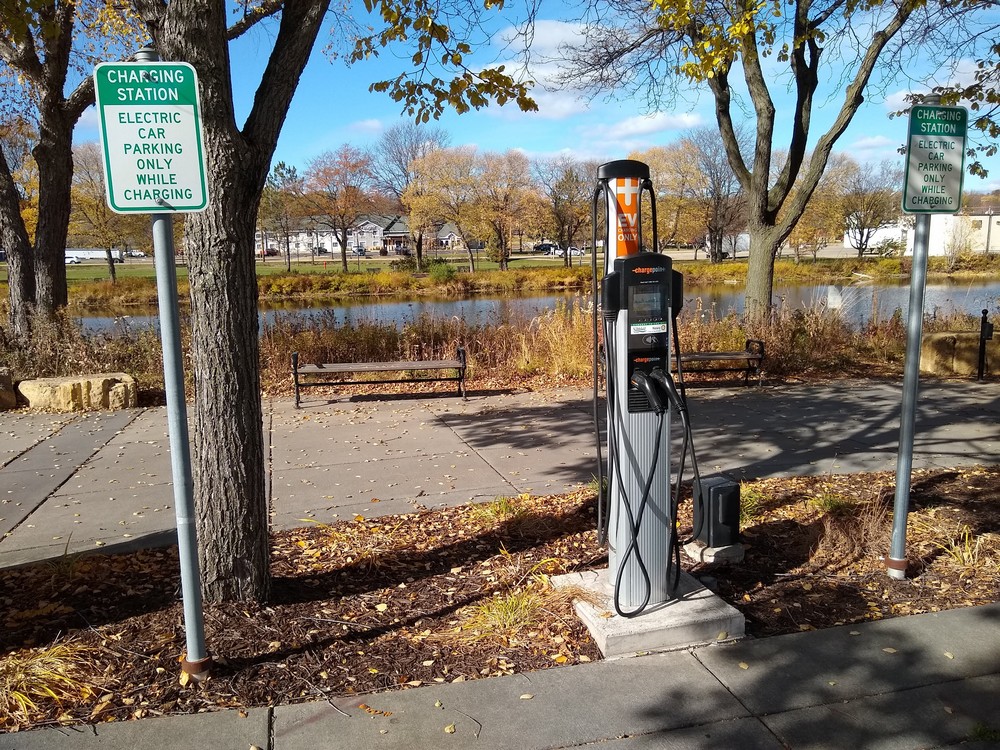 Well over one hundred years ago, when travelers needed gasoline, tire repair or directions, they made their way to the filling station. From general store to sidewalk pumps to the covered drive-in station, the filling station made filling their tanks convenient and safe, even providing free air and water. Despite advancements in technology, not much has changed. Filling stations still sell gasoline—albeit different grades for different engines—and many still provide free air and water. Covered pumps are now a standard feature, most have a convenience store, and some even have restaurants, so the car’s fuel tank is not the only thing they may fill.

Until more recent years, gasoline or fossil fuels have been the fuel of choice. But that is changing. Development of alternative fuels has spurred on the production of flex-fuel vehicles and electric vehicles have found a spot in the automotive marketplace. Electric Vehicles are also known as EVs or BEVs (battery electric vehicles). These vehicles are powered only by electricity and require plugging into a power source to recharge the batteries. Two popular examples are the Chevy Bolt EV and the Hyundai Kona Electric. Hybrids (HEVs) are vehicles with two engines, an electric and an internal combustion engine (ICE). HEVs use the electric motor to assist the gasoline or diesel powered ICE and run on electricity for the first one to two miles before switching to the ICE. An HEV does not plug into a grid or outside power source. Two popular examples are the Honda Accord and the Toyota Prius. The PHEV or the plug-in hybrid vehicle is a traditional hybrid with a larger battery which requires plugging into an electrical power grid to recharge the battery. The Honda Clarity PHEV and the Ford Escape PHEV made the top five PHEVs for Range on Forbes Wheels.

There are 1075 EV charging stations in the Minneapolis-St. Paul—Bloomington areas and promises of more to come for distance driving in the state with locations about 70 miles apart along seven corridors: “State Highway 61 from Duluth to Grand Portage State Park; State Highway 1 between Ely and Thief River Falls; U.S. Route 59 from Granite Falls to Karlstad, and State Highway 23 connecting Marshall, Pipestone and more,” according to Frank Jossi (September 11, 2020) at Energy News Network. That is good news for travelers.

If you are planning to stay a little closer to home, then you may want to become familiar with the twenty-one charging stations in Northfield—Faribault. Northfield has two public EV charging stations at Carleton College, one at St Olaf College, three at Northfield Hospital, and two at municipal parking lots (at 450 Water Street South and at 105 5th Street East). Any of these will charge your vehicle, but they're not all the same. For more details on charging your EV, see these articles from Drive Electric Minnesota and Car and Driver.

Northfield Rotary is proud to help with funding for local EV charging stations—for more on Rotary's work on EVs in Northfield, visit the club's website. Several Rotarians also own EVs with many more considering switching to an EV in the future as infrastructure for these vehicles continues to expand.

Lee Dilley has a long and deep interest in environmental issues, owning a series of hybrids before trying pure electric a few years ago. Shopping around local dealers, he landed himself a Nissan Leaf at GS Motors in Hopkins. Since making the switch, Dilley has upgraded his home charger to a level two—significantly reducing charging time—and identified several prime charging locations around the metro, which not only helps extend the range but also alleviates "range anxiety", which can be a real problem, not unlike "gas price anxiety" which is no longer a concern to an EV owner. Speaking of gas, an EV doesn't produce exhaust, something Dilley notices now when he's around it but doesn't miss in his garage.

Richard DeBeau also recently transitioned from a hybrid vehicle to an EV because, as he says, "we have to do something fast to protect our environment." While an individual's switch to an EV may seem little more than a symbolic gesture, there's no doubt that switching to EVs on a large scale will have a significant impact on fossil fuel emissions. According to DeBeau, there are economic benefits as well. EVs may cost as little as 4 cents per mile, compared to 10.5 cents for ICEs. Instead of visiting gas stations, Richard charges his EV named Bob (Bolt of Blue) at home, a task that he reports takes three hours every two weeks.

Rotary recently held a car show featuring EVs, allowing visitors to get a closeup view of the future of transportation. With a tight EV market, the car show is a great way to pique people's interest. But it's not just for cars and trucks: there was also an electric yard tractor from Taylor Truck Line in Northfield. It is currently used to shuttle trailers for Post Consumer Brands, making dozens of very short trips while making a positive economic and environmental impact. The Northfield News recently ran a story covering Taylor Truck Line and how the future of trucking is changing.

One leader in developing EVs is Tesla, and the Tesla Y is an EV that Dilley believes may become very popular in the years ahead. Tesla is also working on developing battery storage "megapacks" with increased capacity, improving self driving technology, and developing AI in vehicles. As these technologies progress, Dilley sees EVs becoming more commonplace, with travelers having EV rental options and taxis and Ubers switching to EVs. Tesla's work may also expand to other areas, including utilities which may shape a more sustainable approach to the whole economy.

If you're interested in EVs, be sure to read what Jukka Kukkonen has to say about his family’s EV and winter driving in Minnesota here. If you follow his advice and go out for a bit of winter fun in your EV, do not fear the cold or winter roads ahead of you. Remember, you are not alone. Somewhere, nearby, there’s a warm beverage waiting or a bit of fuel or directions from a friendly face at your local filling station.