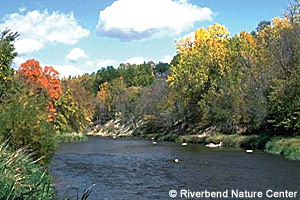 “In every job that must be done there is an element of fun.
You find the fun and snap! The job’s a game...”
Mary Poppins, A Spoonful of Sugar

Whether it is tidying up the nursery or cleaning the local stretch of the Cannon River, work done with friends old and new is never really work.   So, it is time now for you to grab a friend, don your waders and work gloves, and head for the river.  The annual clean-up party of the Cannon River is this Saturday, September 15.  Sign up at crwp.net/cleanup/ for times, locations, and don’t forget the liability waiver.  Why all the fuss?  Because people are messy and our world needs us to keep it clean.

In Minnesota’s early days, the Cannon River, then a small stream, was named for a sandstone rock formation that was sacred to the local Dakota people.  It was called the Inyan Bosdata; in English, this meant “Rock-Standing-On-End,” which later became known as Castle Rock.  As Europeans began to explore the region in the 1700s, the trappers and traders who travelled the river with the local people, “frequently hid their canoes near the Cannon River’s mouth so French fur traders called the stream La Riviere aux Canots, “The River of Canoes.”  (See here for more historical information.)  Over time, mispronunciation of the French name became the Cannon River.

With the influx of settlers in the 1800s came increased use of the land and nearby waters.  Farming, hunting, and buildings changed the landscape.  One flour mill grew into fifteen flour mills over a twenty mile stretch of river.  And the change and use of land and water have not stopped.  In the late 1800s government moved to control the drainage of land for the purpose of agricultural and business development.  It wasn’t until the 1970s that thought was given to protect and clean-up what all that progress left behind; laws were passed to implement pollution control programs.  This was the Clean Water Act (1972).  According to the Minnesota Pollution Control Agency, legal progress and conservation management have improved on the amendments of that act allowing federal agencies to partner with the states.  When the states partner with local communities, then you see real change.

And, that brings us back to the Cannon River, the Cannon River Watershed Partnership (CRWP), and community events such as the annual river clean-up.  Over the past nine years, over 2000 volunteers have helped to pull out of the Cannon River Watershed 139,400 pounds of trash, making it a cleaner, healthier water system.  This is a step in the right direction, a step that allows riverside communities to enjoy biking and hiking the trails, boating and canoeing the waters, and camping and exploring the nearby land and rivers.  For a detailed map and more information about the rivers and watershed, go here for the Cannon and Straight State Water Trails Map.  The CRWP sponsors community events to encourage volunteers to learn about the watershed and how they might help to work with others to clean the environment that everyone shares.

For the last several years I have helped clean the Cannon during the September cleanup event with the Watershed Partnership. I've always enjoyed picking up trash and "cleaning" nature. Something about the site of plastic, bottles and cans littered on the ground among the bushes near roadways, paths and rivers just bugs me. Even when I go to the playground with my sons I can't seem to help myself from picking up little pieces of trash here and there. I love the community spirit of lending a hand together on cleanup day.

I encourage everyone to chip in and help out where you can.